A Clear Solution to The Clear Height Problem

A Clear Solution to The Clear Height Problem

Cubic space. It’s a measurement that is increasingly more descriptive of the usefulness and value of today’s commercial and industrial space. With the rising costs of real estate and new construction, many building owners are looking at existing properties with a renewed vision on value. That value is often found in the amount of clear height within a building.

Although located in highly desirable locations, many times existing buildings fail to meet the specifications of potential buyers or tenants. One of the most common prohibitive factors found among commercial and industrial property in today’s maturing market is often a low clear height.

Simply stated, industrial and commercial property demands have outgrown the structures that are often found within a city’s urban centers.

There are millions of square feet of commercial space in every major city in North America that are becoming non-competitive. Many of these existing properties have a location advantage of being near highways, airports, and urban centers.

The square footage of these buildings generally suits the needs of users. But the fact remains that the bulk of these properties suffer the same undesirable problem. Low clear height.

Yet, some real estate visionaries are seeing these building’s as the perfect investment opportunity by solving this problem. A clear solution to this dilemma has been to simply raise the existing roof of those buildings.

By modernizing the height of these under valued properties, owners and users have been able to create value. Raising the roof is allowing the rejuvenation of buildings that have often sat vacant over extended periods. It has also allowed tenants, whose business growth is exceeding their current facility, to maintain their business operations without relocating.

“Many industrial buildings were constructed at a time when you didn’t need anything more than 16-18 feet of clear height, now most of those buildings are functionally obsolete,” says Marty Shiff, President of ROOFLIFTERS, a company that specializes in raising the existing roofs of a buildings.

As a result of the value that clear height and cubic space, an increasing number of companies are turning to roof lifting as a solution. With few limitations, roof lifting can be applied to virtually any type and size of roof structure. According to Shiff, “In many cases, vertical expansion results in doubling or tripling the amount of usable cubic footage in a facility, all while keeping the entire existing roof and most of the services intact.” Relocating, building an adjoining space, constructing a new building, and other traditional expansion methods are common, but generally more costly.

However, they were about to outgrow their existing facility. To remain efficient, moving their entire business or operate at two locations was not feasible. They considered the adjacent building but at 16 feet clear its was not capable of accommodating cranes or the testing of larger equipment.

After consulting with ROOFLIFTERS, purchasing that building and raising the existing roof to 35 feet clear became the most obvious solution. By lifting the facility’s entire existing roof, Experior was able to convert a building with an ideal location into what they needed.

Why was roof lifting the solution for a business like Experior Laboratories? The option to move to a suitable facility certainly exists, as does demolishing the current facility and building a new larger one. But as obvious as that might seem the options can have major setbacks.

First, real estate and construction prices are continually on the rise in urban areas all over North America. The cost of moving a business can negatively impact a work force and logistics. Secondly, moving can require the total suspension of business operations. In this case, laboratory testing equipment would have needed to be completely disassembled, and then reassembled in the new facility.

Rebuilding on the current footprint, similar to moving, it would require a business either the complete suspension of business operations or multiple moves. Constructing a new facility would also include a wide range of development and construction costs as well as number of government regulations, zoning restrictions and taxes to navigate through. Many of which did not exist when the building was originally built.

Maintaining the existing facility and expanding it outward might seem like an option as well. However, in many instances, this simply is not feasible. If the facility is in a densely populated area, there might not be enough space to expand outwards.

Even when there is room on the property to expand outward, the capacity for trucks to have access to the facility would be either significantly limited or even eliminated.

Allowing a growing industrial business to remain in their current location is not the only reason real estate professionals and business owners are increasing their clear heights. It is also an extremely efficient way to enhance a building’s value or attract tenants. 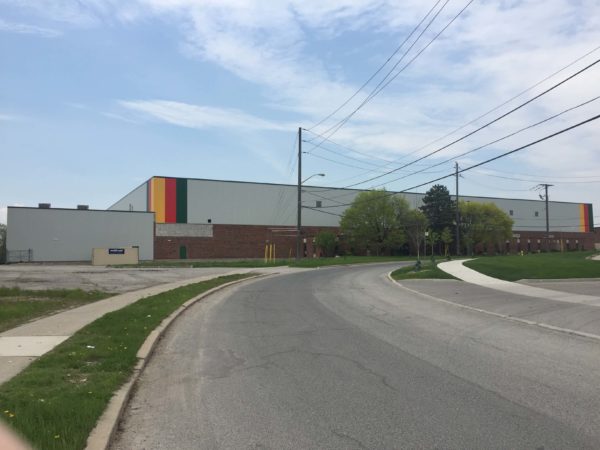 The Aurora Foods building in Toronto, Canada, just after the roof was raised from 18 feet to 40 feet. This more than doubled the cubic space of the 100,000-square-foot facility.

Aurora Foods, a Toronto based food distribution company with over 4,000 products, needed to expand their business. When they decided that it was time to acquire a larger facility, they put a very high value on location.

However, Toronto’s competitive real-estate market made it nearly impossible to find a suitable facility in the location Aurora desired that checked every box. Aurora did find a vacant 100,000 square foot furniture manufacturing building right in the middle of the city and below market value. The reason it was available and for such an attractive price was due to the low ceiling height and the limited number of loading docks.

After consulting with ROOFLIFTERS, and working out the costs, Aurora purchased the building. Knowing that the location was ideal, they had decided to modify a section of the building to create ten new state of the art loading doors and docks. They then raised the entire existing roof from 18 to 40 feet, creating Aurora’s new Toronto distribution facility and retail center without sacrificing location.

Forward-thinking is the basis of The Seyon Group’s investment strategy. Based in Boston this industrial real estate company seeks out functionally obsolete properties with the intent to capitalize on under-valued assets.

Knowing the region’s tenants and their desire for cubic space and higher clear heights they identified a 200,000 square foot former can manufacturing facility with only 16 feet of clear height. The building simply wasn’t suitable for today’s demands.

Seyon reached out to ROOFLIFTERS and together prepared a cost analysis and timeline to increase the building’s clear height from 16 to 32 feet and modernize the building. Once purchased, Seyon demolished the interior spaces and put into place a schedule to raise the roof and retrofit the building.

Seyon was able to fully lease the property prior to starting construction.

“Over time, real estate has become so expensive that it’s rarely feasible to purchase a building, knock it down, and rebuild it in the same place.” says Shiff. “With changes to distribution, logistics, and consumer demands many of buildings in key locations that have low clear height are being re-evaluated.”

In today’s real estate market, what good is an industrial building without volume? There are efficiencies when considering a typical 100,000 square foot building with a clear height of 18 feet compared to that same building once the roof has been raised to 32-foot clear height. Without changing the footprint of the original structure, lifting the existing roof provides more than a 75% increase in usable space.